Posted on September 19, 2015 by isantraveller

The Phana Macaque Project was very pleased and proud to host three students from Mahidol University for 10 weeks recently. The students were in Phana to get work experience for their third-year project. Arin Yotthonglang (“A”), Natchanok Pangsang (“Tai”) and Sakchai Kurujitgosol (“Chris”) carried out  variety of work in Don Chao Poo Forest, and more widely in the community. They were well supervised and advised by the tutor assigned to them by the university, who made several visits to them during the time they spent with us, and they also had contact with staff at Mahidol’s branch at Amnat Charoen through the projects the Don Chao Poo Research Centre is running in collaboration with Mahidol University.

Here they are in front of the Chao Poo Shrine with Khun Ta Putta Tabutda, the specialist who identifies trees and medicinal plants as part of the forest survey project. The three students assisted with the collection of data for this project, the Plant Genetic Conservation Project (OPST is the Thai abbreviation we mostly know it by), which is run by Mahidol University on behalf of HRH the Crown Princess. 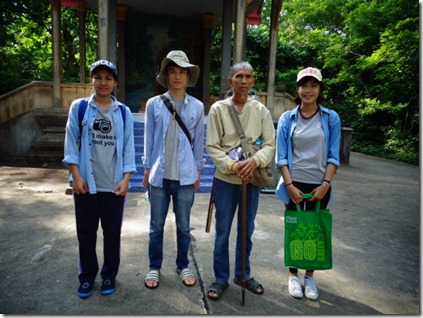 With Pensri, they researched and recorded evidence of ‘old growth forest’ in two areas of the forest, creating a photographic database. 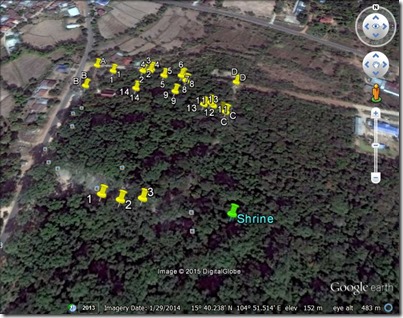 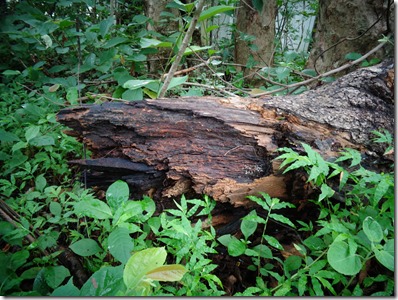 They worked with two volunteers, Eric (from USA) and Helen (from UK)  in conducting a series of experiments to determine to what extent monkeys have a colour preference. Monkeys were offered food on dustbin lids or in buckets, always with a choice of 3 colours from red, green, blue and black. 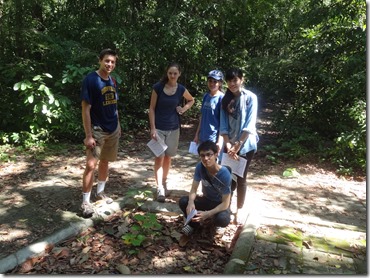 With Helen and Eric they also counted monkeys in several locations in and around the forest at various times of the day and produced usage density maps which have proved very useful in indicating the presence and movement of monkeys through the day. They also spent time with us observing monkeys assembling at their sleeping sites.

Feeding and watering the monkeys was a daily chore which they enjoyed, once they and the monkeys had got used to each other. They even invited two other Mahidol University students to join them. 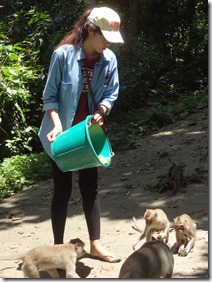 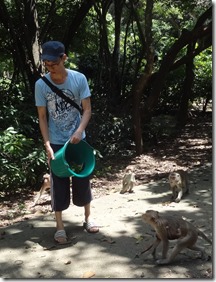 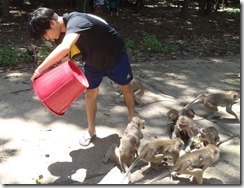 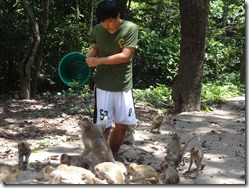 They got out and about in Phana, too, and seemed to be enjoying themselves: 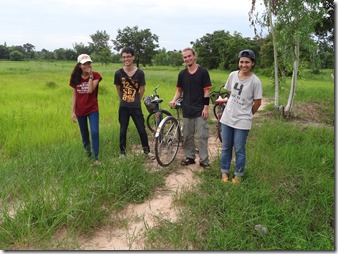 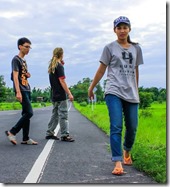 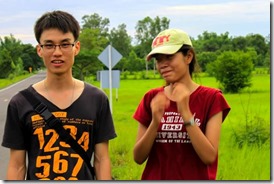 For one week they were assigned to the Thai Traditional Medicine Centre, Phana, where they studied traditional herbal medicines being prepared and helped packing them. They also spent time learning about the Centre’s therapeutic massages.

During the week they spent working for the municipality, they prepared a report setting out how much carbon could be absorbed by various types of tree found locally, and they set up model to be used by the municipality in its effort to lower carbon in the local environment.

In their last couple of weeks they renewed the exhibition marking Phana’s 300 years of history, and re-designed several panels for the long-tailed macaque infomation exhibition, both of which which considerably brightened up the Rin-Homhuan Mahanil Study Centre.

Finally they worked on an extension of the OPST which involved collecting, sorting, identifying and drying a range of plants found in Don Chao Poo forest. Here they are at work at the Don Chao Poo Research Centre: 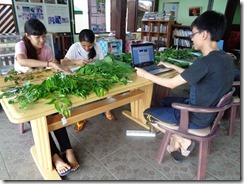 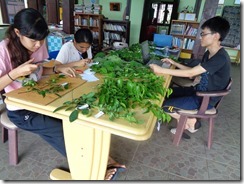 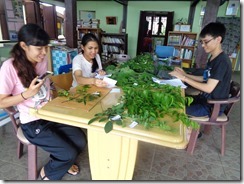 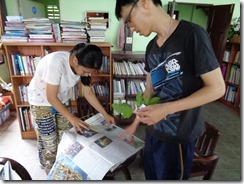 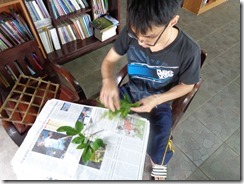 These three students from Mahidol University have been gone a month now, but we still miss them! And we remember the valuable work they did for us while they were in Phana. We hope that Phana has made a useful contribution to their studies in return.

I have been in and around North-East Thailand for more years than I can recall. I now live here permanently. I have travelled in 32 countries on 3 continents (Europe, Asia, Africa) so I am a bit of a traveller.
View all posts by isantraveller →
This entry was posted in Bio-diversity, Community action, Mahidol University, OPST, Plant Genetic Conservation Project, Provisioning long-tailed macaques, Research and tagged bio-diversity, community action, environment, Mahidol University, OPST, Plant Genetic Conservation Project, Thai forest research. Bookmark the permalink.