Using the term ‘Monkey Forest’ in this post may be misleading because what I am celebrating here is species that have not previously featured on this website and which we were unaware even existed in the forest.

There are a couple of exceptions to that, however. We knew we had Monitor Lizards but had not seen them for several months. Now one large adult has reappeared and two younger, smaller specimens. This picture is of one of the younger ones, showing off a bit, I think. 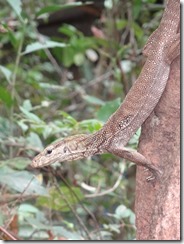 And the next two pictures are of a fledgling owl that I saw for the first time this morning. I have heard owls in the forest at dusk and later, and have thought I saw one, but this one flew straight towards me at about 8 am and, exhausted by its early flying efforts, I think, sat on this slender branch until a monkey came along and shook it off. 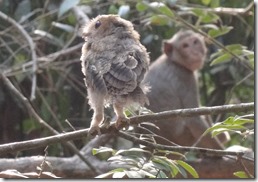 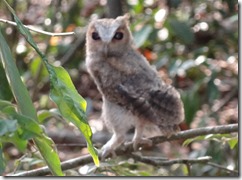 The next four pictures, though, are of species we did not know inhabited the forest, but the fact that they do comes as not much of a surprise. 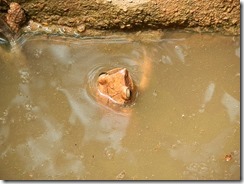 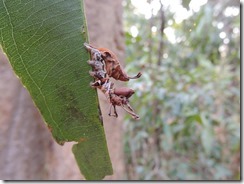 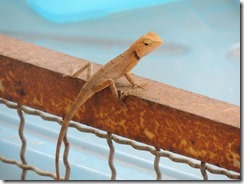 Thanks to Rebekah for the toad (frog?) and Elizabeth for the other three.

I have been in and around North-East Thailand for more years than I can recall. I now live here permanently. I have travelled in 32 countries on 3 continents (Europe, Asia, Africa) so I am a bit of a traveller.
View all posts by isantraveller →
This entry was posted in Bio-diversity, Monitor lizards, monkey forest, wildlife photography and tagged bio-diversity, Don Chao Poo Forest Phana, monitor lizards, monkey forest, Thai forest. Bookmark the permalink.

2 Responses to Newly discovered fauna in the Monkey Forest