The Phana Monkey Project is about to reach a crucial stage. A week from now five  researchers, all recent Msc graduates in Animal Behaviour from Exeter University in the UK, will arrive in Phana to begin a  project which will provide the basis for  the establishment of Don Chao Poo Forest as a research field site as well as educational and informational material for schoolchildren and visitors to the forest.

This team will be carrying out most of the research which you can find listed on the RESEARCH page on the bar above. In addition, they will be conducting some research of their own along lines that they discussed last Friday with Dr Joah Madden of Exeter University. Details of their research will appear on this site.

As far as the Phana Monkey Project goes, we have not been idle in the last few months. We have held meetings with the Phana Municipality to clarify our role and theirs. At least one of the original intentions has been abandoned: the money is no longer available for an “Ape Museum” to be built in the forest. Although the promise of this was perhaps the key starting point for the then-named Macaque Project, I think all of us who have carried the idea forward see abandoning that particular part of the project as a good thing. There was every chance that had a building been provided, there would have been no money available to keep it staffed and maintained; on top of that, building inside the forest would have been a major disruption. There are already two small buildings in the forest which have been abandoned and left to the monkeys to play in — their main playthings being ceiling and roof tiles, which they love to pull off and destroy.

The Tetsaban have suggested an alternative to an ‘Ape Museum’ in the forest. The old market building is to be converted into a kind of community centre, and it will provide three main spaces. At one end will be a community IT centre with 22 computer stations. There will be a similar-sized space at the other end of the building which we will be able to use to show videos to visiting schoolchildren. The central space will be for occasional community meetings, and we will provide an exhibition detailing macaque information and photographs in that space.

The tetsaban is providing the materials for the conversion of this building but the community will provide the labour. In the following pictures you see the headman of Moo 7 and his wife working on the new floor, which they have completed since the photos were taken.

CLEANING UP THE FOREST

Last week we worked with the tetsaban / municipality and some students from the school they run, to clear the forest of litter. It is amazing how quickly litter accumulates, and monitoring it will be an important focus of the upcoming research, so that hopefully we can recommend some practical ways to reduce the litter produced and ensure that litter is removed frequently. Our monitoring will be made more useful because we have established a ‘zero-litter’ environment before the monitoring begins. This way we should be able to get a clearer picture of when, where, and how much litter is dropped over a weekend, for example. Already the tetsaban have put a new cleaning team in place to collect and remove litter and we are sure this will be a great improvement on the previous ’emergency’ cleaning sessions before big events.

The Phana Monkey project has also been working to provide a centre for researchers to use while they are in Phana, and the team from Exeter University will be the first to do so. The building is almost ready, and the only thing which may prevent them moving in as soon as they arrive is that water and/or electricity may not be connected in time. Details of this centre will appear here as soon as all is ready.

Last week we experienced our first recorded road traffic fatality, an adult male killed on the road outside the forest just before 8 am. As it happened, Pensri and I were on our early morning cycling exercise, so Pensri put the still-warm monkey in a plastic bag (there were still plenty lying around at the beginning of the week) and took him home. Our first thought was taxidermy but it quickly became apparent that no-one locally had the skill and experience to do this; we soon realised, too, that there was litle point in creating a life-like specimen when we have more than 400 live ones! With advice from Prof Dr Suchinda at Chulalongkorn University, we decided to preserve and display the skeleton. The person in charge of the museum in the Biology Department at Chula sent us some insects (in a box, via the Railway parcels service) and for more than a week now these insects have been nibbling away at the cooked flesh and revealing more of the skeleton. When the process is completed we will post pictures of the skeleton and more detail regarding the process. For the time being, here are a few of the photos we took of our monkey soon after the accident. The monkey had been hit a glancing blow on the side of the head which had fractured his skull but not smashed it. Nevertheless, bleeding was still evident through his nose and mouth, so no pictures of his injury are included here. The blow struck him on the left side of his head, the side not shown here. He was a fine specimen as can be seen from his teeth. (CLICK on the photos for an enlarged view.) 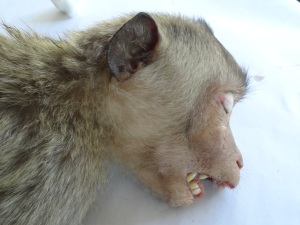 I have been in and around North-East Thailand for more years than I can recall. I now live here permanently. I have travelled in 32 countries on 3 continents (Europe, Asia, Africa) so I am a bit of a traveller.
View all posts by isantraveller →
This entry was posted in Amnat Charoen Province, Long-tailed Macaques, monkey forest, Research, Tetsaban Phana and tagged Amnat Charoen Province, Amphur Phana, Isaan, Isan, Long-tailed Macaques, primate research, Thai monkeys, Thai Road traffic fatality. Bookmark the permalink.