Bringing monkeys back from the edge

Posted on November 14, 2011 by isantraveller 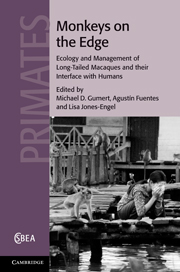 I am not qualified to review this book — it is written by and intended for people with a much more academic interest in long-tailed macaques than me. What I can say, though, is that it could not have been published at a more opportune time as far as the Phana Macaque Project goes, since it deals with all the aspects of living alongside these monkeys which are of interest and concern to us in Phana.  It also points to problems we have not yet come up against; and most important of all, it has recommendations for solving some of the problems that we have already encountered or seen the possibility of emerging in the future.

Here are some  quotes which seem particularly relevant to us in Phana. They come from the Thai primatologist who is advising the Phana Macaque Project:

‘In Thailand, there are pros and cons to having a troop of long-tailed macaques living close to humans. Many people benefit from the monkeys, such as banana vendors, hotel owners and shop keepers, but there are also people who live near monkey populations who do not gain any economic benefits but receive damage. Up to now, there are no concrete management plans nor primatologist participation to overcome the problem of local overcrowding and conflict with humans. The local overcrowding of long-tailed macaques is a delicate matter, and to solve the problem we need mutual understanding among people…

I will include further quotes from the book in future posts.

I have been in and around North-East Thailand for more years than I can recall. I now live here permanently. I have travelled in 32 countries on 3 continents (Europe, Asia, Africa) so I am a bit of a traveller.
View all posts by isantraveller →
This entry was posted in Long-tailed Macaques, Macaca Fascicularis, monkey forest, Monkeys and tagged Long-tailed Macaques, Macaques, Thai monkeys. Bookmark the permalink.