We try to cycle every morning and our route takes us onto the Phana ring road and over the Huay Phra Lao bridge at Don Jik. A small troop of long-tailed macaques lives here but whether or not we see them depends on the time we cycle past. Yesterday we saw them at 8.10 am and this morning we saw them at 6.45 am. Between these two times we have usually not seen any sign of them. We are starting to record the times when we see them and when we don’t, as well as counting the number we do see. So far the most we have seen together has been 16, and we have seen that number on several occasions. However, a local farmer whose fields they sometimes raid estimates their number to be about 30. I first wrote about this colony in March 2011 and you can read that post here:
http://phanathailife.typepad.com/thai-life-phana/2011/03/a-breakaway-colony-of-long-tailed-macaques-in-phana.html

From their point of view, the monkeys have an almost perfect habitat. They live beside the small tree-lined river (Huay Phra Lao) which has some water all year round. 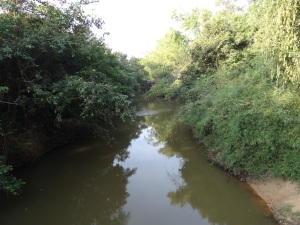 They spend time resting, playing and sleeping (and presumably foraging for food) in the river-side trees:

The monkeys spend some time on both sides of the road and could easily cross from one side to the other by going along either bank of the river below the bridge. But for some reason they prefer to cross the road, which is usually empty but also has some big, fast moving traffic at times — buses and trucks, mostly. The alpha male seems to act as a kind of crossing patrol. Here he is, striding about the road in a very confident manner:

The high-ranking female also acts as a kind of guardian, seeing that her offspring cross the road when she wants them to. I have heard her calling them on two occasions and she waits for a responding call before leaving the bridge. I have not been aware of hearing such calls in Don Chao Poo, but it is something I shall now be on the alert for. 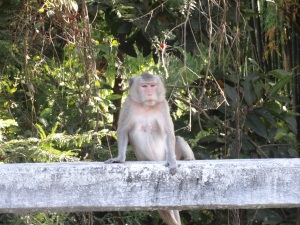 Click on the photo to enlarge it, and you will see that she has a supernumerary nipple below her right normal one. (There may be two supernumary nipples, but I think the one on the right is a shadow only.) When she visited Phana earlier this year (September 8 and 9, 2011) Dr Suchinda Malaivijitinond noticed the same pattern on a female in Don Chao Poo Forest.

This might, of course, suggest that the two colonies are related. They are, after all, only about 2 kms apart as the crow flies (or the monkeys range). Local wisdom says that they were ‘dumped’ here about 5 years ago from a truck which had brought them from Don Chao Poo as part of a failed ‘kidnap’ attempt.

I have been in and around North-East Thailand for more years than I can recall. I now live here permanently. I have travelled in 32 countries on 3 continents (Europe, Asia, Africa) so I am a bit of a traveller.
View all posts by isantraveller →
This entry was posted in Amnat Charoen Province, Long-tailed Macaques, Macaca Fascicularis, Macaques, Monkeys and tagged Amnat Charoen Province, Don Chao Poo, Long-tailed Macaques, Macaca Fascicularis, supernumarary nipples, Thai monkeys. Bookmark the permalink.